Society's Auction Catalog 52 is fully illustrated and full color. Over 400 lots, 160 pages. A catalog that stretches the view a bit further as its nucleus is the late Hardin and Pat Lee’s Collection. Rare it is to have a whole group from decades of researching primarily western North Carolina. With other southern collectors create an uncommon offering a chance to see such a large horizon of paths. From George Ohr of Mississippi, iconic Cheever Meaders face jug, a rare Florida important face jug, the most vast Catawba Valley important collection ever to be offered, also North Carolina’s famed early 20th century art pottery which is striking, South Carolina sampler is of high attention, furthering counterpart is Dave Drake’s relic jar signed and dated, both before the Civil War era and so much additional pieces like the North Carolina long rifle, signed carvings, some furniture, there just seems to be so much for so many collectors with unknows to unusuals.
Printable (Auction 52) Post Sale Price List 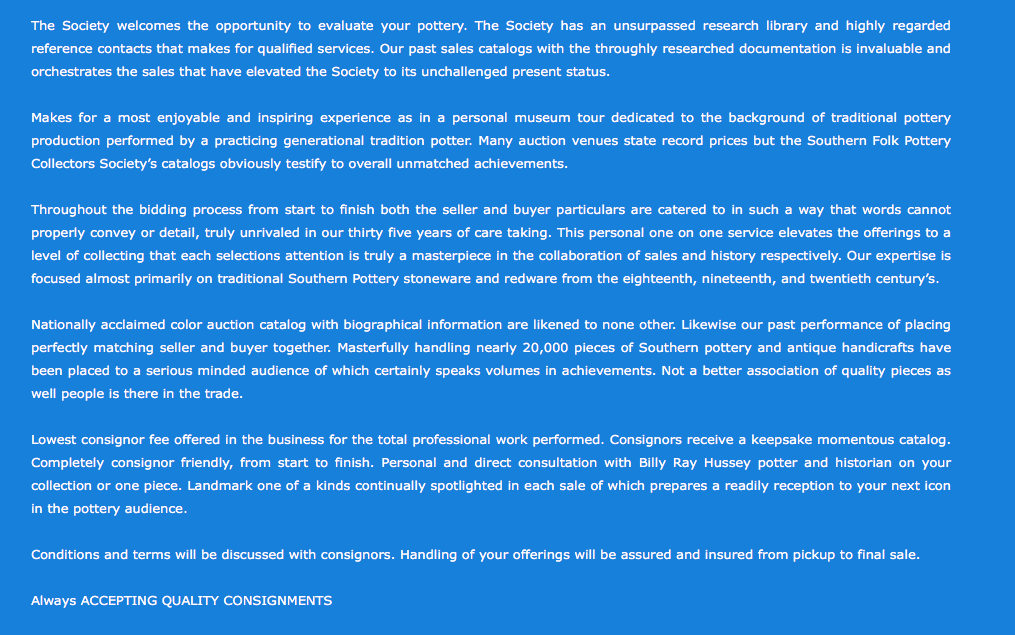 "Consignors" of items in the sale will receive a complimentary Auction Catalog.
Send images of pottery considerations to our email address below or fill out information and send photos on the Auction Item Registration Form.
​Please send just one photo view of each piece as we can request more images if needed. Use small or medium jpeg photos.
Always accepting quality consignments for our Auction Sales.
​Thank you and hope to hear from you soon.
Contact Us
Auction Item Registration Form